You are using an out of date browser. It may not display this or other websites correctly.
You should upgrade or use an alternative browser.

Bye Bye Yamahas.... she is off to get Suzukis 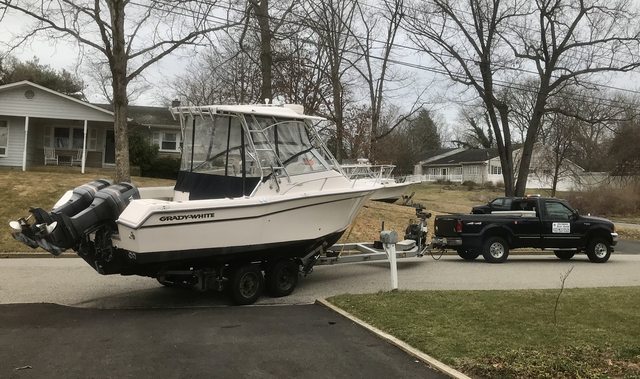 Edit: In case you land here and don't want to read thru the whole thread, here is a summary...

Loaded with 250 gals of gas and 150 pounds of ice
ran to canyon 252 miles total and burned 159 gls = 1.59 mpg avg
(for reference, my Yamaha ox66 225s averaged 1 mpg on same trips and we had to bring safety gas and limit trolling while there or troll some going out and back)

Top speed loaded was 39 mph @ 6000 and 1.1 mpg
Conditions were ideal...glassy and minimal swell
Light in flat calm river I get to 41mph

Had problem with the mounting of steering off my Yamahas. The dealer, Sherman's Boat Basin, installed the seastar 5345 cylinder on the bottom of the pivot arm and it prevents the starboard motor from raising out of the water. They say that the tie bar from my Yamahas prevents them from mounting on top.
I have a new seastar HO6001 tie bar on order.
Another 265 got same motors from same dealer and they were able to mount his on top and both motors come out of the water when raised.
Edit: I moved the steering cylinder to the top and installed the HO6001 kit and both motors are well out of the water when raised. I set the spread to 28 3/8".

The motors were mounted in the same holes as the Yamahas. One hole from all the way down. It is not possible to lower them as the motor will hit the transom before reaching that hole. They are 28" on center. The dealer set them parallel, ie, the tie bar was 28". I lengthened the tie bar 1/2" thus giving the motors a "toe out" angle(props pointing toward centerline slightly). This definitely improved the 265 slow speed wandering steering!

I had the dealer add the Auxillary Charging cables so that my House batteries are always charging when any motor is running.

I don't regret going down in horsepower from 225s. The 200s are plenty for the boat unless you are always in calm water and like to fly.
IMO the 265 does not handle well above 40 mph in any case.

Edit: since break-in the mpg has improved. Gauge consistently reads 1.6 or 1.8 at 30mph and generally 1.6 at 34mph in nice seas.
Last edited: May 25, 2022
Reactions: PointedRose, Captseahook, B_Darling and 1 other person
M

Awesome, there’s a 265 in my marina with new Suzukis 250 hp all white. They look huge on her,
it will be a sweet ride congrats.

Nice. Keep us up to date. Would be interested if you are doing any transom work while off. I'd remove the bang plate, seal up and add a new one at a minimum.
G

You have been threatening this since you got it. Dreams really do come true!! Big fan of Suzuki's. I live vicariously through you. Haha. Keep us posted.

Here's our new 300's on our 282
Reactions: Bread, Captseahook and SkunkBoat
B

exited for you looking forward to videos and some numbers!!! I've been planting the seed in my finance's head repower after the wedding lol
Reactions: SkunkBoat

Fishtales said:
Nice. Keep us up to date. Would be interested if you are doing any transom work while off. I'd remove the bang plate, seal up and add a new one at a minimum.
Click to expand...

I would love to have the boat with motors off in warm weather to glass over that seam but the aluminum cap is in really good shape and it is sealed really well.
Don't want to slow down the process...

bac0701 said:
exited for you looking forward to videos and some numbers!!! I've been planting the seed in my finance's head repower after the wedding lol
Click to expand...

The member here Tilewave is about to do the exact same motors at the same dealer.

Nice, let us know how this goes. I hope that there are twin 200s in my future. I think that the 265 Express and the 270 Islander have similar dimensions.

I know its not much of an update but things are moving fast....

Be still my foolish heart!!

Hope they don't fork that end at the shop

It's good seeing MADE IN JAPAN on those boxes.

Toothpick 10 said:
Nice, let us know how this goes. I hope that there are twin 200s in my future. I think that the 265 Express and the 270 Islander have similar dimensions.
Click to expand...

if the yammies fit, the sukes will look better.
M

nice, cant wait to see it finished and see what the fuel burn numbers are

You better pull a heist and take those nitrile gloves in the pic. They may come in handy soon